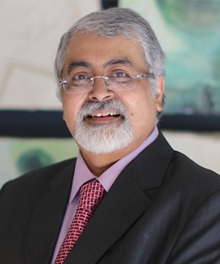 Mr. Shardul S. Shroff is the Executive Chairman at the Firm with over 36 years of extensive experience in General Corporate, Bankruptcy and Insolvency, Mergers & Acquisitions, Capital Markets and Disinvestment. Mr. Shroff is also a leading authority on Corporate Governance, Policy and Regulatory Practices, Media Law and Technology Law.  He has been instrumental in developing these practice domains within the Firm.  He has significant exposure in strategic alliances and takeovers, mergers and acquisitions, divestments, spin-offs, joint ventures, capital markets, and commercial contracts.

As a preeminent expert of his field, Mr. Shroff has been appointed on significant boards of Indian companies. Mr. Shroff is an independent director on the boards of Ashok Leyland, Jindal Power, Visa Power, and Hindustan Media Ventures Ltd. (HMVL).

Widely regarded as a pioneer in the field of Corporate Law, Mr. Shroff has been on a number of high-powered committees appointed by the Government of India and the States of India including committees on various legislations. He has recently been re-elected as the Chairman of National Committee on Legal Services by Confederation of Indian Industry (CII), India’s leading industry chamber. Mr. Shroff was also the chairman of the CII National Committee on IT & ITeS for the year 2015-16, a member of the CII Public Policy Council, and a member of the CII Task Force on the Ease of Doing Business in 2016-2017. He has been appointed as the Senior Vice President on the Society of Indian Law Firms (SILF).

Mr. Shroff has been consistently rated as a leading lawyer by several international fora and publications, including the Who’s Who Legal, Asia Law, Chambers Global, Euromoney, International Financial Law Review (IFLR) etc.  He has also been the recipient of several awards and global commendations for his work in M&A, Corporate Restructuring, Capital Markets, Banking and Project Finance.

IFLR1000 2016 edition, the guide to the World’s Leading Financial Law Firms, has adjudged Mr. Shroff as a leading lawyer in the areas of Banking & Finance and Mergers & Acquisitions. Chambers and Partners, 2016 quotes Mr. Shroff as "offering deep expertise in handling complex financial transactions and debt restructuring work”. Who’s Who Legal Energy Guide 2014 praises Mr. Shroff as one of our most highly regarded practitioners in the guide. The guide further, describes him as a “legendary figure” in the Asian legal market, and internationally acclaimed by peers and corporate counsel, and states that he has a “phenomenal knowledge” of the sector, whilst also boasting “first-class” M&A and financing skills.

Mr. Shroff was a member of the high powered V U Eradi Committee constituted by the Government of India for examining issues of corporate insolvency and cross border insolvency.  He was also a member of the high powered JJ Irani Committee, which was constituted for recasting the Companies Act.  He has previously served on two other Committees relooking at the revisions in the Companies Act.  He has also chaired committees of the Ministry of Corporate Affairs for a detailed relook at matters pertaining to offences under the Companies Act, the Cost Accounting Rules, the Valuation Procedures and Rules in India.

Being a prominent practitioner, Mr. Shroff has participated in the training and drafting of several important economic legislations and company law reforms in India.  Mr. Shroff’s was key member of the high powered Government of India Committee known as the JJ Irani Committee for amending the Companies Act. He was appointed as a member of the Expert Committee formed by the Government of India to examine issues relating to maintenance of Cost Records and Cost Audit in 2014. He has also been a member of the Eradi Committee relating to the insolvency of companies, which was involved in the recommendations that led to the insolvency provisions in the Companies Act, 2013. He has been a member of the second Naresh Chandra Committee appointed to look into aspects of small and medium enterprise and simplification of Company Law (LLPs and joint ventures). He is a member of the US-India Business Council, Vice Chair of the Corporate Counsel Committee of the IPBA Council, the Union Internationale Des Advocats, and the Indo-German Chamber of Commerce.